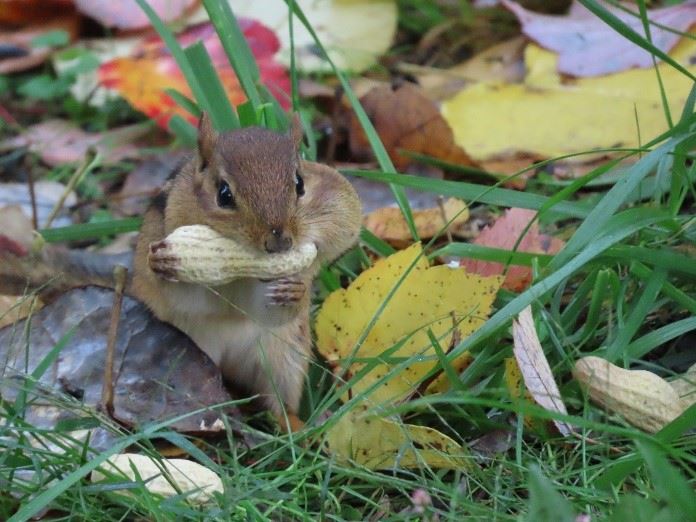 Eastern Chipmunks have mostly reddish-brown fur with a single black stripe running down the center of their back.

Two black stripes and one white stripe run down each side of their body (from the neck almost to their tail).

They also have a white underside and a white stripe above and below their eyes.

These Chipmunks range in size from 8 to 10 inches long. Males and females of this species look identical with no sexual dimorphism between them.

This species is in the Squirrel family, which makes them related to Groundhogs and Prairie dogs. In MD, these animals can be found west of the Chesapeake Bay. This is the only species of Chipmunk found in MD.

This species can be found in deciduous forests, shrublands, and forest edges as well as suburban and urban areas where there is enough cover to protect them from predators.

These Chipmunks will build a network of underground burrows that can go up to 30 feet in length and 3 feet in depth. They will also remove fresh dirt from the entrance to hide their burrows.

Eastern Chipmunks are omnivores; they will eat seeds, nuts, berries, fruits, flowers, mushrooms, worms, snails, small frogs, and even bird eggs. While they are foraging, they will also often stuff food into their cheeks that can expand up to three times their normal size.

Unlike many other small mammals, this species will breed twice per year and the offspring are bumblebee size when they are born. The father provides no parental care and the offspring need to stay with the mother for 6 weeks before they can be independent.

This species is very territorial and male and female Chipmunks will only come together during breeding season.

Eastern Chipmunks make a variety of sounds. They can make single or repeated (80 - 180 chips per minute) bird-like chip calls to signal their presence. In addition, they also make chucks which are lower pitched and signal caution, fear, or annoyance. 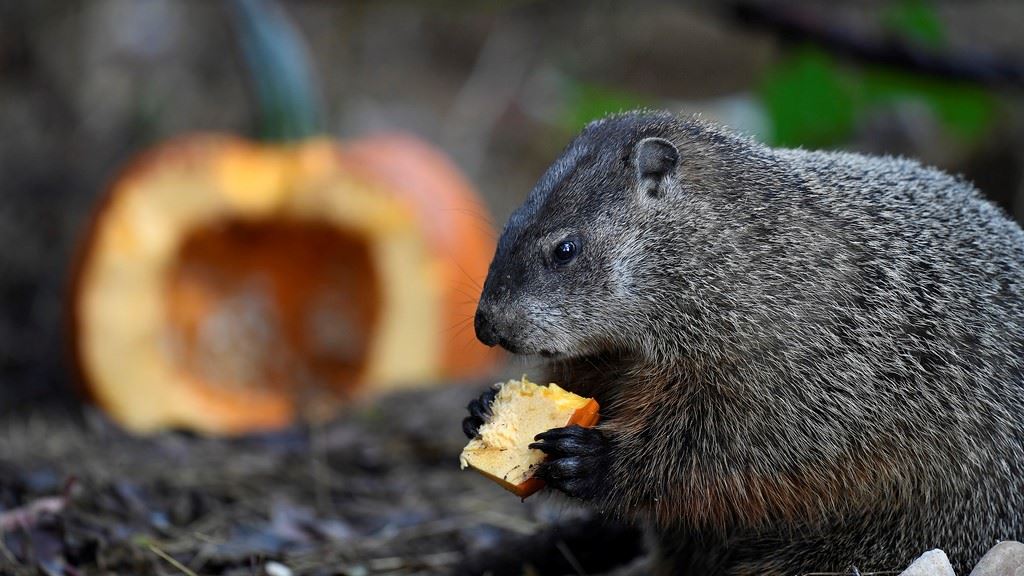 Groundhogs (also known as Woodchucks or Whistlepigs) have short and powerful legs with dark brown feet equipped with heavy claws that are specialized for digging. Groundhogs also have a short, bushy tail and they often sit on their haunches to feed.

These animals are members of the Squirrel family which itself is a member of the order Rodentia. This actually puts them as a closer relative to Squirrels than to Beavers or Rats. This species is common in MD and they prefer to live along forest edges by open fields.

They especially like fields used for agriculture. Groundhogs dig burrows or tunnels underground to live in and hibernate in during the winter months and these burrows provide homes for other animals like skunks, foxes, opossums and rabbits. These burrows will generally have 2 to 5 entrances to allow for escape from predators.

During hibernation their heartbeat can slow down to 4 or 5 beats per minute from their normal 80 beats per minute and their body temperature can drop from 98 degrees to as little as 38 degrees. It is this hibernation process that gave rise to the custom of “Groundhog Day” on February 2nd every year when Groundhogs are usually coming out of hibernation.

These animals are herbivores and can commonly be found grazing on grass, leaves, flowers, clover, alfalfa, wheat and rye though they will also raid gardens or agricultural fields if the opportunity arises.

Groundhogs will breed in late March/early April and the male will stay with the female in the burrow until just before the offspring are born.

The name Whistlepig comes from the shrill whistle sound they can produce to warn others when they are alarmed. Groundhogs will also chatter teeth, hiss, squeal, or growl when angry as well. 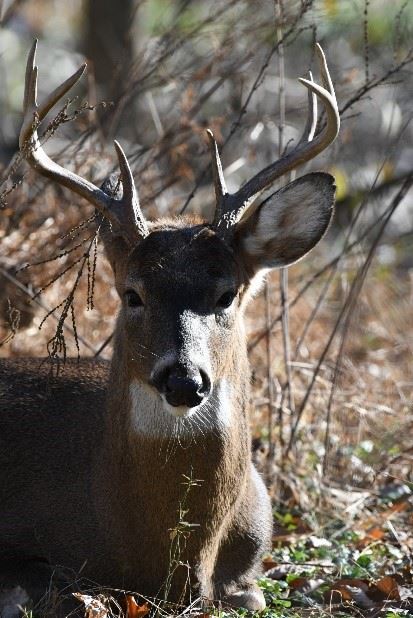 Adults are about three feet tall at the front shoulders with variable coat coloration through the seasons. This species will have reddish-brown coat during the warm months and a grayish-brown coat with a thick undercoat to replace the reddish hair during the cold months. The most distinctive feature of their appearance is their white tail and white rump patch that is readily visible when they bound away from danger.

These deer are also able to sprint up to 35 miles per hour and are able to leap over 8 foot tall barriers as well. This species have a range throughout most of the state of MD except for areas of open water and intensely developed urban areas but thrive in habitats with wooded/brush sections and open areas such as cropland, pasture, or landscaped yards.

Bucks will grow (late March/early April) and shed their antlers each year and will use them to establish dominance among each other. During the growing process, the antlers are covered in a combination of skin and blood vessels collectively known as velvet. Because of this, the antlers are temporarily blood red in color when this velvet is shed, revealing the bare bone.

The diet of White-tailed Deer consists of nuts and berries, leaves, woody shoots and stems, grasses, and cultivated crops though they also enjoy crops such as soybeans and corn that are planted by humans. Similar to other ungulates, this species possesses a four-chambered heart to digest these diet items.

Today, these deer are so plentiful that their populations are managed by hunting. It is thought that this population control became necessary after their primary predator, the Grey Wolf, was extirpated from MD in the mid 1800’s.

This species is polygamous and one male will mate with many females, resulting in all of the parental care for offspring being provided by the mother. White-tailed Deer are also strong swimmers and they will use streams, rivers, or bodies of water to escape predation.