The select water-cress received on the Washington and Philadelphia markets comes from Frederick county.

And 1 man raises, cuts, sells, and delivers the thousands of bunches that find their way onto the Washington and Philadelphia markets each year from Frederick county.

The man who operates this unique business is Wilson T. Carmack, near Harmony Grove, who owns cress ponds at Fountain Rock, Buckeystown and Bloomfield as well as several smaller beds. 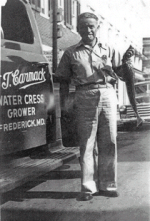 Mr. Carmack is holding a large bass.
He grew into the business. As a lad he worked for the late J. Graham Johnson in the water-cress business. The business isn't new in the county.

But in recent years it has grown in volume. Science proclaimed the high content of vitamins A, B, and C and several mineral foods in water-cress. Metropolitan markets have increased the demand for the greens.

Right now, about 3000 bunches are harvested each week and delivered twice a week to Washington and Philadelphia markets and stores.

So skillful has Mr. Carmack become in cutting, tying, and packing the cress, that he says he can harvest 200 bunches an hour consistently. Wednesday he cut 1,200 bunches. On Thursday he took 900 more bunches to market.

He has been delivering about 3,000 bunches a week since the first of March. This demand will continue through May, he said. Then the market will decline until about September 1 and then continue until cold weather halts cutting. He was able to cut through January this year. He is able to cut through an open winter, he said.

A bunch is a handful of cut cress. The cress is cut, tied and packed as the workman wades through the spring-fed marshland. The price ranges from 2 ½ to 5 cents a bunch and a few years ago was as high as 6 cents.

His entire crop is sold annually in the 2 cities-Washington and Philadelphia. Very little is sold locally, he said although many persons cut water-cress from along spring branches for individual or for sale on a small scale.