Overview
The battery of limestone kilns operated from approximately 1872 - 1955 and produced a powdered burnt lime that was used for field fertilizers and crushed stone for road surfacing.

Park visitors are now able to travel a self-guided interpretive trail around the remaining 6 of the original 8 kilns. The last 2 were never used because they were considered unstable and have now collapsed. 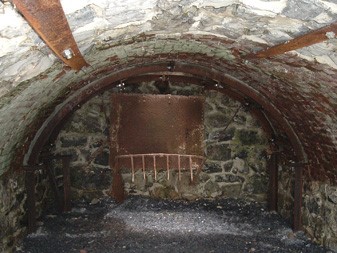 The Property
Limestone quarrying was an important industry in Frederick County 100 years ago because of the rich limestone fault that runs under the entire county. From examining the deeds recorded on the Fountain Rock Park property, it is evident that the land was used extensively for this industry. It has not been determined in exactly what year the kilns were built, but it is known that on November 18, 1907, it was referred to as the Fountain Rock Lime Company.

Leonard Barrick bought Fountain Rock in 1907, as a supplementary limestone quarry to the Barrick Woodsboro plant, which he started in 1874. His family said that Fountain Rock Spring was not profitable (there were not enough kilns), so he sold it to Stoner and Powell.

Labor
During World War II, since manpower was in short supply, some German and Italian prisoners of war were brought to Fountain Rock Park daily by bus to provide labor.

Another German prisoner of war, Otto Keihling, acquired a bow and arrow set from the prisoner compound and gave it to Woody Handley’s son, Bob, for his 9th birthday. Mrs. Teddy Handley was quoted in an interview as saying “Our boys were over there and their boys were over here”.

The Railroad
The railroad, bordering the south side of the park, was constructed in 1872, and was utilized in the lime industry. Some of the railroad remains are shown below.